Don’t you just want to put your hair up and not worry about getting a headache in a few hours?

Or, when you take your hair out, pull half of it with you? 😛
If yes, then let me tell you SCRUNCHIES are going to be your best friend and latest accessory (if you’re like me and wear them on your wrist everywhere). 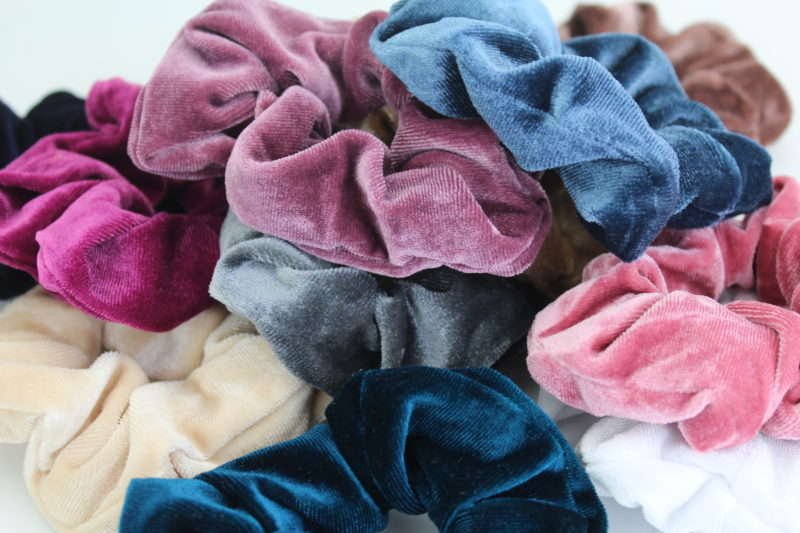 So let’s look at the history of the scrunchie…

The scrunchie was supposedly invented in the 1986 by a woman named Rommy Revson who was a night club singer & pianist.

She was looking for an alternative to plastic and metal hair ties that upon use, were continually damaging her hair, and one night while house-sitting in the Hamptons, the idea magically came to her.
And guess from what? Pyjamas!
How? The waistband of course!
She decided to sew fabric around a piece of elastic and that there, was the creation of the first SCRUNCHIE!

A black and gold style was introduced to us and to this day, both the prototype & sewing machine used for this brilliant creation, are in the Smithsonian Museum (in the USA). 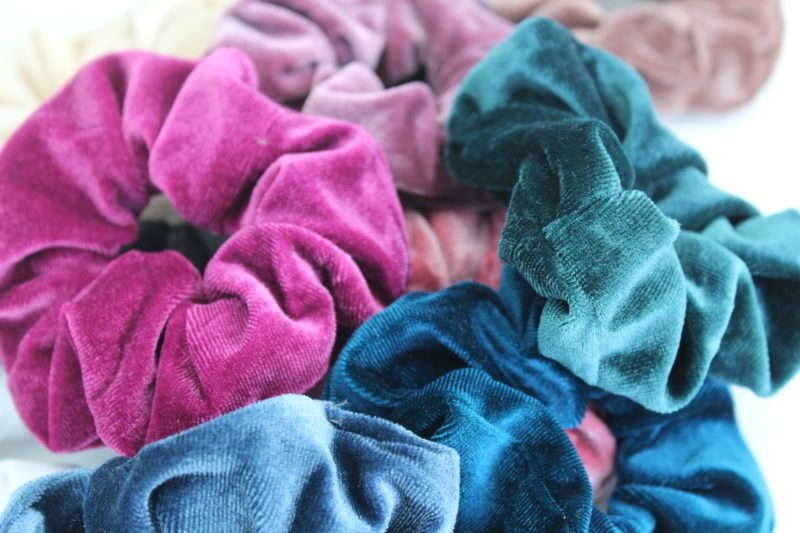 Now the name ‘Scrunchie’, where did that come from?

Well, while trying to brainstorm a name for this marvellous creation that girls and women all around the world were going to undoubtedly love, her dog kept barking, and at that point, she realised there isn’t a better name than her dog’s name, ‘Scunche’.

In 1987, after receiving the first design patent, she sold the licence to Scunci International, an existing hair accessories company. They initially named the remarkable creation ‘Scünci’, but in time, later added the “r” as it rolled of the tounge and was easier to say, might I add, also sounded better.
So, from there on out, once the name had been changed to the one we all know today, the rest was, well, I guess you can say, HISTORY! 😉 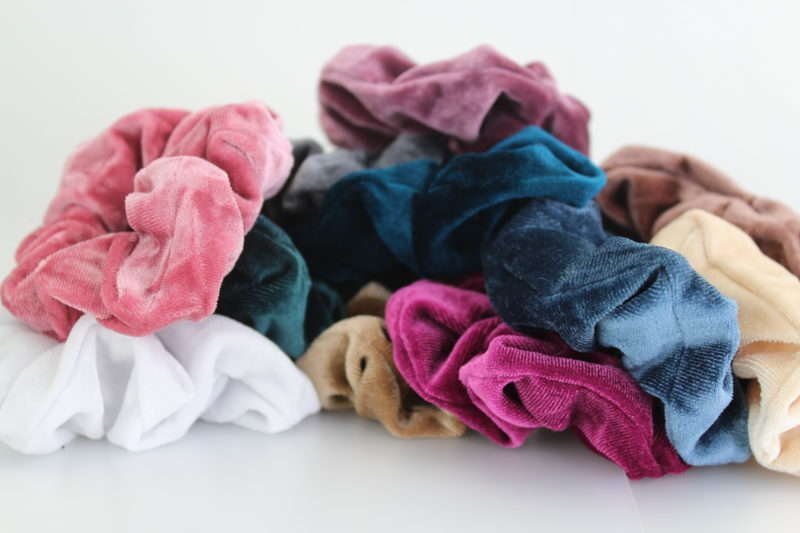 Let’s go back down memory lane…

… Before anyone says: “OMG! Scrunches! They are so childish and a thing of the 80s & 90s..”, why? Because who loves high waisted jeans & flares, plus denim skirts & jackets? Oh, what about leggings with baggy tops & jumpers?

If you answered yes to any of the above, well you can answer this too; is that the 80s & 90s or what?

So, if you can’t beat them, join them! You may as well jump on the scrunchie train and ride it for as long as you can because they are indefinitely timeless!

Scrunchies are comfy and are less likely to give you a painful headache after hours or wear, kind of like the plastic and rubber hair ties I used to once wear.

If that isn’t convincing enough, they don’t rip out your hair like a basic hair tie. And for that very reason, they are amazing at reducing hair breakage.
So why wouldn’t you want to wear a pain-free, comfortable, super soft (our velvet ones hehe) scrunchie?
Might I add, they are also super stylish. Want to put your hair in a high pony-tail? You can, along with giving your up-do a little pop! Or even, keep your fringe from your eyes? Well then, why not a fashionable half-up, half-down look? Or, if you’re like me, and just want a basic bun or top knot, a scrunchie takes it from boring to stylish in seconds. 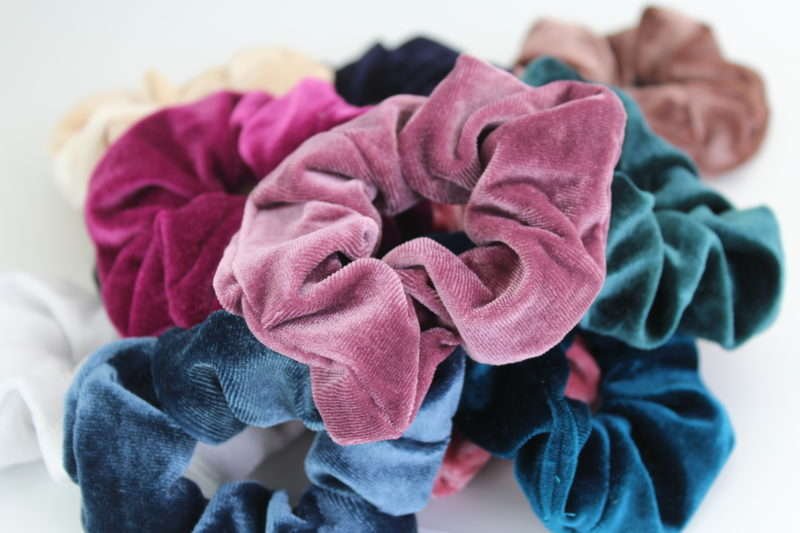 As you can see, it definitely turns any bad hair day into a cute one.

Plus, they come in a variety of styles and colours. And for that reason, I am sure you will find one to match every outfit!

Also, if you’re ever on the go and usually put a hair tie on your wrist, once you try a scrunchie, I am sure you will never go back because that was ME!
Our velvet scrunchies are so soft and they not only look amazing on your hair but also on your wrist. I cannot tell you the amount of times it’s been there, and has come in so handy.
All I can tell you, is that I love scrunchies and if you didn’t, I hope you love them now!
Kim xx 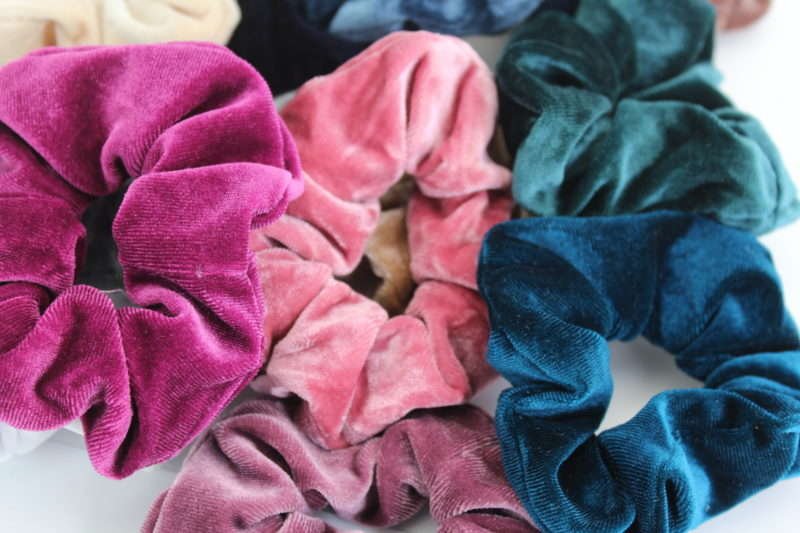 The Importance of Conscious Shopping

Buying things is fun, no one will argue that. Especially this time of year, we are buying so many gifts for Christmas, outfits for the holiday celebrations, maybe you’re even treating yourself for working hard all year - there is no problem with that! My message to you is to is to shop consciously, to make sure you are supporting businesses that are taking a step in the right direction.
Read More

5 Gifts for Teens this Christmas

Christmas is just a little over a month away and if you are wondering what to get your teens this year, worry no more because Bath Box has you covered with 5 Gifts for Teens this Christmas...
Read More

Shopping for presents isn’t always easy and sometimes if you have a Secret Santa it can be even more difficult, especially if you don’t know them very well or what they want this year. Not to worry, we have got you covered with 5 Top Secret Santa Gifts that you can give to that person you picked out of a hat!
Read More